Those of us who study and write history find the subject fascinating even when the text is a little dry. But as the funding landscape changes, and historians are tasked more and more with impact beyond the ‘ivory tower’, we need to re-think how our books and articles are written. For instance, Kiera Lindsey and her book, The Convicts Daughter. This was a runaway hit with the public, but it was also her PhD topic, and brought her subject matter into the public spotlight. (See for example Kellie Moss review of this book: “unique ability to appeal to a new type of reader.” Australian Historical Studies 48:2 313-4). This is not to say that an entire article or book can – or should- be fictionalised. Some topics simply don’t lend themselves to this kind of storytelling. Vignettes in journal articles and monographs are not new either. Generally though, these vignettes are written from an omniscient POV – that is an external narrator re-telling events. This blog post is going to take this vignette writing one step further, into the Point of View of the person who lived the events – even though it means turning history into fiction. 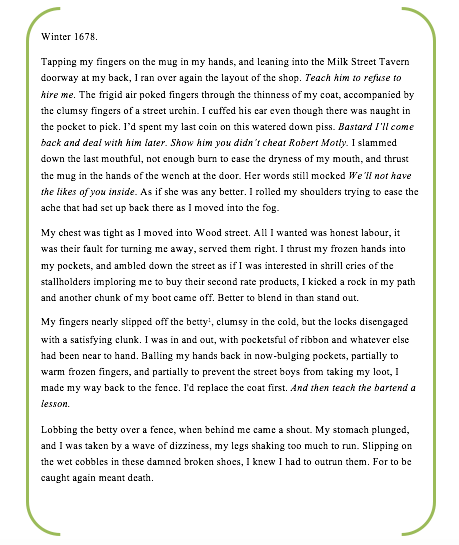 The first is to anchor the details that you cannot change – that is the bits of information that come directly from the evidence. In the case of the snip above, those details are few and far between. We know the offense happened in Cheapside, we know he stole ribbons and other unknown items, we know that he used a betty, we know the date of the offense.[1] We also know his name (Robert Motly/Motley). Based on the conviction record we also know that he had already been convicted previously and returned from transportation – which carried a death sentence. From these meagre details, we can figure out a few more details to sink us into the scene – for instance, the date means it was winter. A little digging on historical weather patterns tells us that that winter was a second super cold winter, and that there were many out of work. Digging in another direction helps us to understand the clothing that someone poor and out of work might wear – aka second hand coat with no gloves. From there we have to use a bit of imagination – for instance I cannot know that his hands were cold, even though that is a reasonable assumption. We also can’t know how Robert felt about his crime – was he angry at his circumstances as I have portrayed him, or was he nervous, or was this simply his way of life? I don’t know exactly which street the crime occurred on, although both wood and milk streets existed, and shops selling ribbons could be found on wood street. I also can’t know that it was foggy and snowy, though weather patterns tell me this is likely.

At its simplest, it is because I enjoy this style of writing – even if some of my writerly friends tease me about my affinity for the weather. But there is more to it than just that.

The piece I opened with is in a deep 1st Point of View (POV), but you could equally use omniscient, a distant first or even a 3rd POV. Here is the same section in the other two POV:

You can see in the distant 1st that we are in the man’s head, but we really don’t feel what he feels. I am still telling – not showing the reader. In both the Omni and Distant first samples that I initially wrote (before revising to a deeper first), the reader does not connect with the man’s panic or fear of being caught in the act. For an emotional response, you need that deeper first. But you also have to know your audience. Something written in Omni is going to be much more readily accepted by an academic press than something written in a deep first. The Kiera Lindsey book I mentioned above is mostly in Omni although she does slip into a distant 1st at times.

So if Omni is already accepted, why make a suggestion for a different style of writing? Because if historians want to engage a wider audience they need to think about the ways in which a non-academic audience reads. If we want history to be seen as a continuous narrative, we need to tell it as a story.

Omniscient storytelling is no longer a common way to write a novel, though it can be used. Most popular fictions engage in first or third. Omni is actually the hardest style to do well for a novelist – although no other POV is a walk in the park either. As historians, writing small Omni vignettes makes sense, given we are dealing with facts not fiction, and are almost easier to write given the non-fictional nature of the people we write about. Yet by turning to the 1st for vignettes, different parts of the reader’s brain are engaged.[2] In using a deep 1st, we can help readers experience the story and give an emotional connection to the people who came before us. This might help historians show just why history matters not only to the people who study it, but also the people who lived it then, and perhaps even live it now, connecting the present with the past.

[2] ‘What Storytelling Does to Our Brains’, Social, 29 November 2012, https://blog.bufferapp.com/science-of-storytelling-why-telling-a-story-is-the-most-powerful-way-to-activate-our-brains; ‘Why Telling A Story Is The Best Way To Activate Our Brains’, Lifehacker Australia, 6 December 2012, https://www.lifehacker.com.au/2012/12/why-telling-a-story-is-the-best-way-to-activate-our-brains/.

ANZASA Online is the blog of the Australian and New Zealand American Studies Association. It is an interdisciplinary space where scholars of the United States can share their research with the public, and a wider community of academics. ANZASA Online offers an international platform to the vibrant community of Americanists studying and working in the southern hemisphere, and helps to foster a greater sense of intellectual community among these scholars.